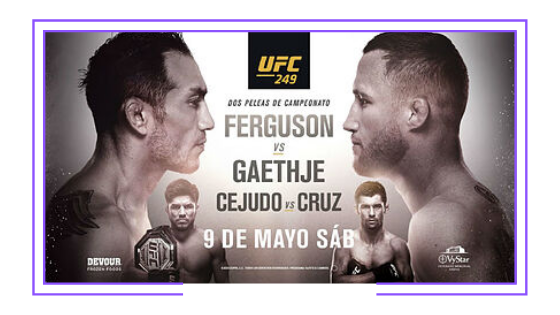 UFC (Ultimate Fighting Champioship), a mixed-martial arts league, is to resume activity on May 9 after several cancellations; the first date scheduled after the outbreak of Coronavirus (COVID-19) pandemic was April 18. In the United States, the fight will be aired by Espn+ (Disney) in PPV (pay-per-view) mode. In Latin America, TV rights are held by Disney in Spanish-speaking countries and Globosat (Globo) in Brazil.

Disney is to broadcast the fight in South American Spanish-speaking countries on Espn 2 channel and Espn Play OTT platform, except in Chile, where the fight will be televised through Fox premium package (Disney is not allowed to share TV rights with Fox in Chile). In Mexico, it will be broadcast through Fox premium package too (Disney is not allowed to run Fox Sports and is required to sell it). In Brazil, Globosat will broadcast the event on Combate premium channel.

In this way, UFC becomes the first important sports league whose events will be viewed live in Latin America and in the whole world after the outbreak of the pandemic.

Tony Ferguson and Justin Gaethje will headline UFC 249, while Henry Cejudo and Dominick Cruz will co-headline the event. The four of them are U.S. sportsmen. The event is set to take place without a live audience at VyStar Veterans Memorial Arena in Jacksonville, Florida, United States of America.