SimpleTV launches its own sports channel 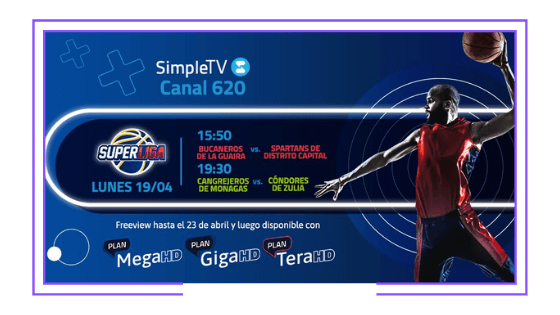 On April 19, SimpleTV (Scale Capital) launched a new sports channel (channel 620) to broadcast the Superliga, Venezuela’s paramount basketball tournament. Channel 620 is the Satellite TV company’s own channel, which was included in the three top packs, namely Mega HD, Giga HD and Tera HD. As a launch promotion, the new channel will also be available to subscribers to the two lower packs for four days.

For the time being, the new channel does not offer continuous programming. Nor has it got a definite name. It is referred to as SimpleTV Sports in the operator’s electronic program guide (EPG). According to the EPG, the channel will offer “content related to several sports, such as boxing, basketball, soccer and international baseball, with live broadcasts and the best staff.” So far SimpleTV has not disclosed what other tournaments will be aired, in addition to the Superliga, whose TV rights are shared with local channels Meridiano TV, Venevisión, La Tele Tuya and TVes, as well as the tournament’s official channel, accessible on YouTube.

Simple TV President Alexander Elorriaga had previously announced that Simple TV would include its own sports productions in its line-up. The aim is to mount a project similar to former DirecTV Sports Venezuela, when the company was owned by AT&T. It is worth highlighting that DirecTV Sports channels are included in the DTH’s line-up, since SimpleTV avails itself of DirecTV’s infrastructure in South America to operate.